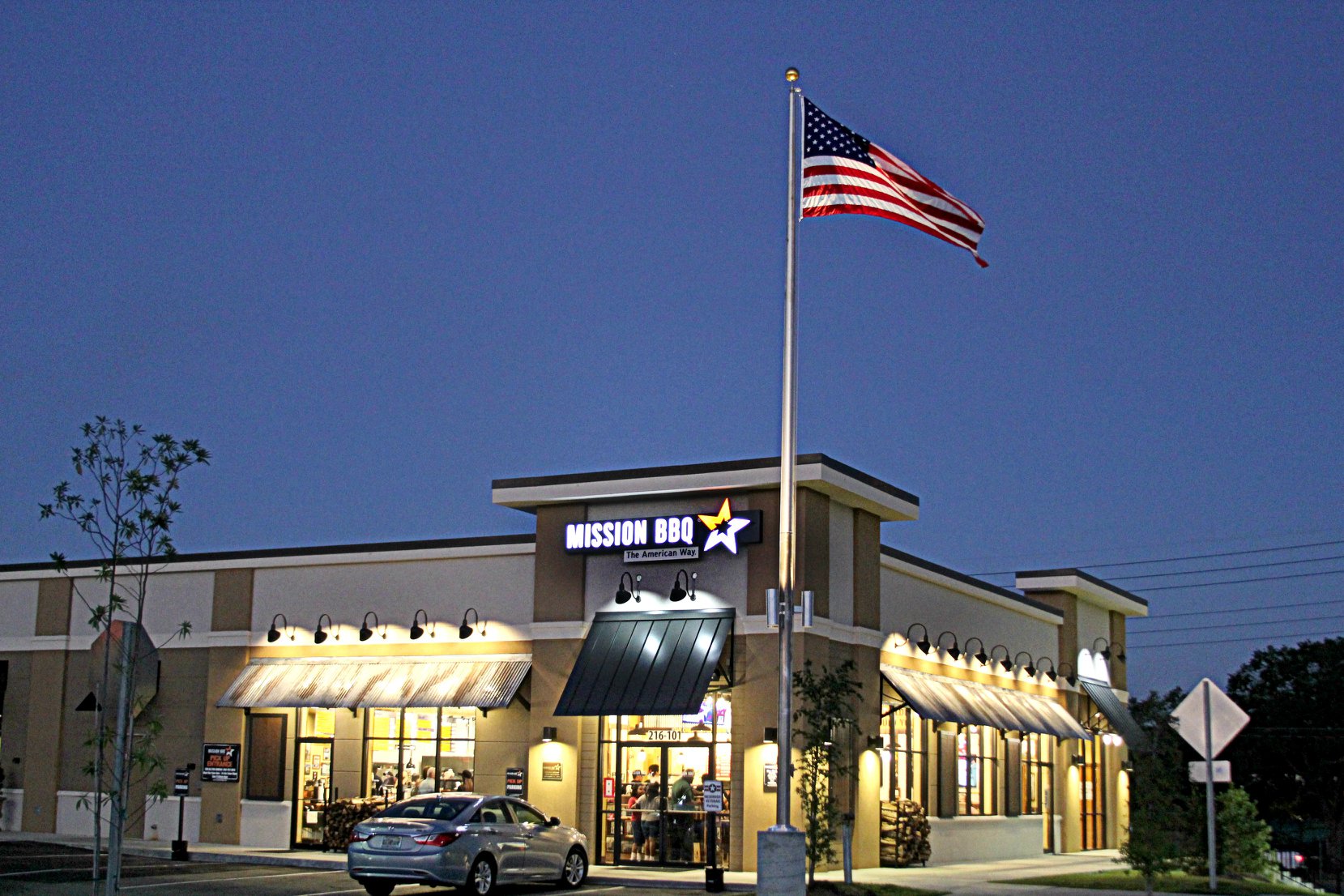 BBQ lovers in the National Capital region undoubtedly recognize the orange and black star logo of Mission BBQ. Since launching on September 11, 2011, that star – and the restaurants that it represents – have become synonymous with some of the finest smoked meats in the area.

But Mission BBQ is more than just quality brisket, pulled pork and ribs. The restaurant chain has been built from the ground up to have a higher purpose. And that purpose is to restore a piece of America that was fundamentally changed on that fateful date ten years prior to the first Mission BBQ’s opening.

According to Bill Kraus, the co-founder and co-owner of Mission BBQ, part of that mission involves bringing American families back together. 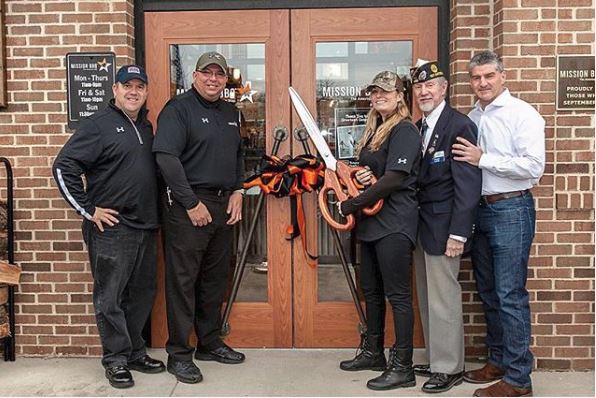 And “building these places” they are. Less than a decade after opening the doors on its first establishment, Mission BBQ now boasts 75 locations from Maryland to Michigan. In fact, on December 3, the company announced the opening of its latest restaurant in Brookfield, WI – its first in the state. Overall, the company is looking to be operating 80 locations by the end of this calendar year.

What has been driving this massive success and growth for the company? Mr. Kraus revealed three essential ingredients at the recent ACG National Capital Monthly Meeting. Two of those ingredients may seem rather standard for a company in the crowded and competitive restaurant industry. However, the company’s third ingredient may be more surprising and special – although it’s far from a secret.

Good food and better service
“We don’t allow freezers and we don’t allow microwaves,” Bill gleefully opined to the ACG National Capital members and their guests at the Monthly Meeting. The lack of these appliances may seem strange to some, but they’re intentionally absent to ensure that Mr. Kraus – and his co-founder and co-owner, Steve Newton – are doing their beloved BBQ justice.

Mr. Kraus and Mr. Newton attended the same church parish. Mr. Newton had worked in the hospitality industry for the Outback Steakhouse restaurant chain, and he shared Mr. Kraus’ love of BBQ. They were both looking for the next chapters of their professional lives, and – together – set out to establish a restaurant company that allowed them to, “do something that would allow [them] to serve. Allow [them] to give back.” 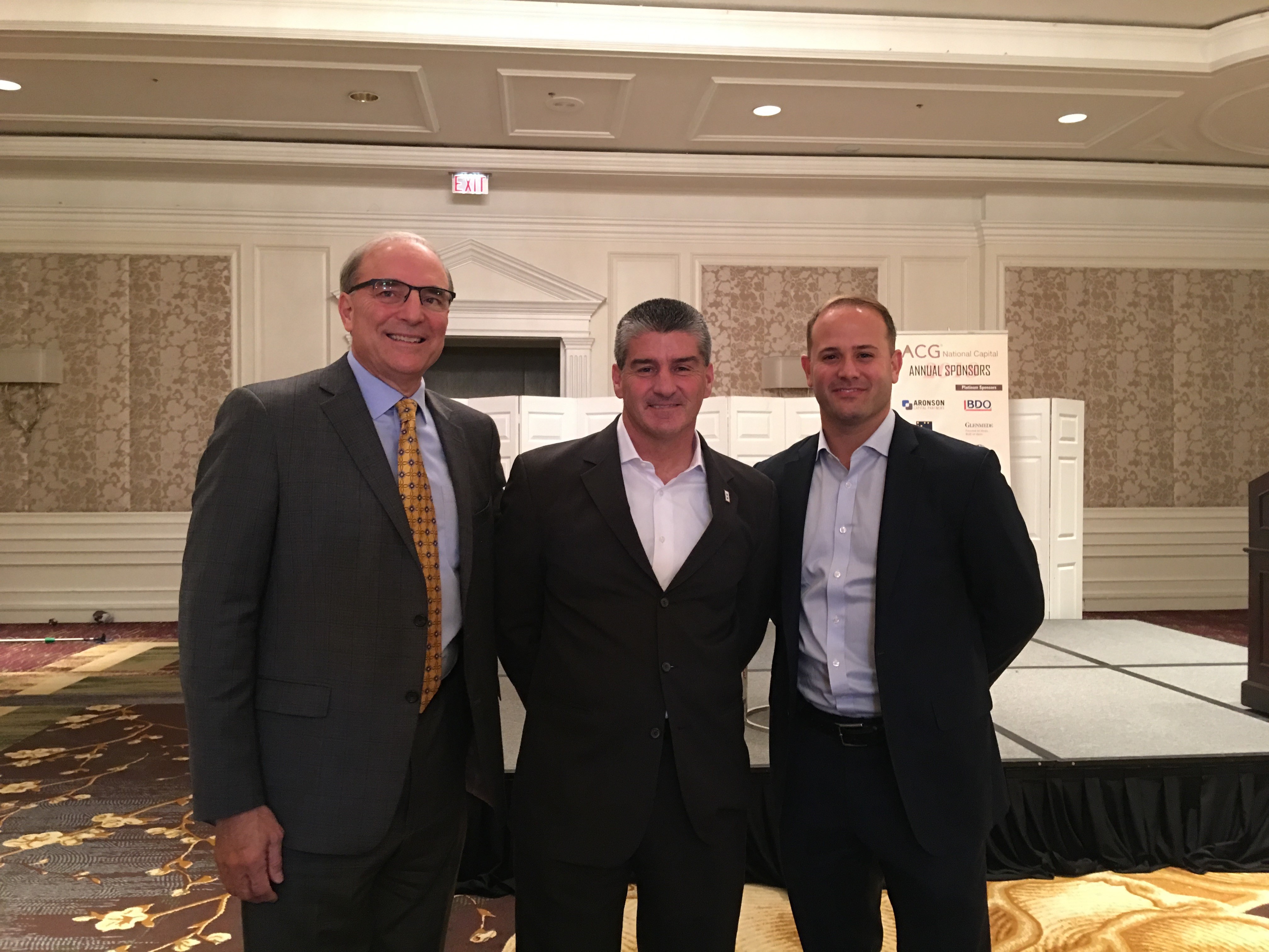 Together, the gentlemen established a “low and slow” methodology for creating always-fresh, never-frozen BBQ. It’s this incredible dedication to a quality product that has helped them succeed in what Mr. Kraus labeled the “underdeveloped BBQ sector.” A sector that he claims, “…doesn’t exclude anybody.”

But the food is just one of the traditional ingredients facilitating the company’s success. According to Mr. Kraus, the other is service.

We believe we’re in a people business. The world didn’t need another restaurant when we arrived,” Mr. Kraus explained. “…we saw this enormous gap [in the industry] where it’s hard to find good service. We felt that service could be a great differentiator for our brand. Ultimately, the service and experience that you get at Mission BBQ makes our great food taste even better.”

Good food and good service are essential ingredients to any successful restaurant -and ones that many restaurants would claim they strive to include in their customer experience. Mission BBQ is making sure that those two things are always baked in whenever a customer walks through the door. But there’s another less traditional ingredient that really makes Mission BBQ stand apart from the rest of the pack.

Love of BBQ…and greater love of country
With a 32 year-old son that’s active-duty Army, and a 25 year-old son that’s active duty Marine Corps, Mr. Kraus had his eyes opened to the incredible sacrifice that our Armed Forced make to protect the safety and security of our nation and its way of life. As Mr. Kraus said it, “I’m humbled by what I get to do because of what some others were willing to do.”

Having set out to establish a restaurant business that enabled them to give back, both Mr. Kraus and Mr. Newton reveled in the opportunity to make patriotism and love of country and its military a cornerstone of Mission BBQ.

“I don’t glamorize what I’ve done or what I’m doing,” Mr. Kraus said. “This is just the simple story of my best friend and I that had a love of BBQ and – more importantly – a love of country. We just set out to build a business that had purpose and meaning and significance.”

That love of country is evident in every aspect of Mission BBQ – from the retired military vehicles in the parking lots, to the donated military patches, photographs and paraphernalia on the walls. It’s also evident in a very unique tradition that Mission BBQ customers can experience every day at noon.

“…the best two minutes of the day are when the registers aren’t ringing,” Mr. Kraus explained. “Every day at twelve noon at every Mission BBQ – at our busiest time of day – we shut our kitchens down, everything comes to a halt, we make an announcement and we play the National Anthem.”

But the company does more than just claim they’re patriotic and play the National Anthem. They also back up their patriotism with incredible acts of service and generosity to America’s heroes – including those serving overseas and the police and firefighters keeping Americans safe at home.

Giving back to those that serve
Patriotism isn’t something that Mission BBQ extols in an attempt to pander to America’s military, police and firefighters. They work hard to serve those that serve Americans. 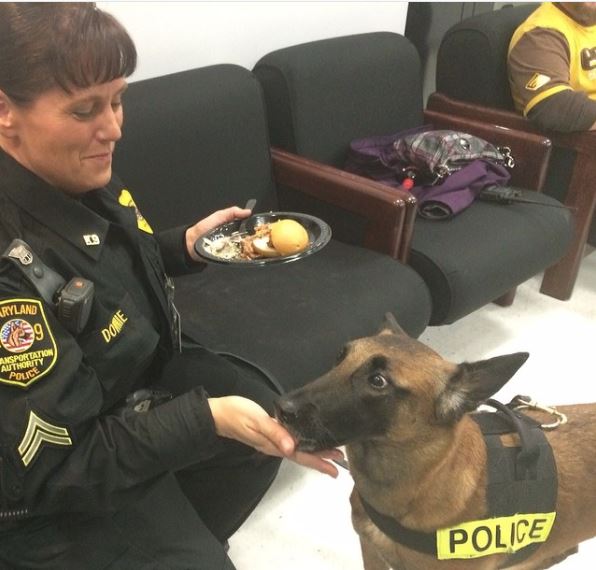 Serving those that serve them. Mission BBQ makes it their mission to give back to firefighters, police and military. (Photo courtesy of Mission BBQ)

The company has partnered with the cooler company, Yeti, to feed America’s troops. The company utilizes donated Yeti coolers to get its incredible BBQ to troops deployed overseas at times when, “…we all think, wouldn’t it be nice to be home?”

As Mr. Kraus explained, “Yeti donates 160 quart coolers to us. We smoke it. We cool it. We freeze it. And we load it into the coolers. It gets picked up and put onto the back of military transports and we now feed American troops all throughout the Middle East, Africa and Afghanistan. We have 100 coolers in the program.”

The company also serves the police and firefighters in their own community. During the rioting and protests that rocked Baltimore in 2015, the company was on-hand to feed the public servants that were working around the clock to keep residents of the city safe and restore peace. All told, the company fed 21,000 meals to emergency personnel during the protests.

This love of military, police and firefighters has paid dividends for the company. These communities have become loyal defenders of the Mission BBQ brand and devoted customers.

What we’ve found out about these folks is that they’re initially standoffish. They’re questioning what we really want,” Mr. Kraus said. “Yet, when they find out how sincere and genuine we are – how we’re always going to be there for them at their times of need – they become fiercely loyal. They protect and defend our brand for us and be brand disciples for us. Seven years in, we have yet to spend a single dollar on traditional marketing or advertising. We buy cool trucks and we go out and we feed people.”

To learn more about Mission BBQ and their inspiring story of success, click HERE. For information on upcoming ACG Monthly Meetings, click HERE.